The World Bank Issues a Warning 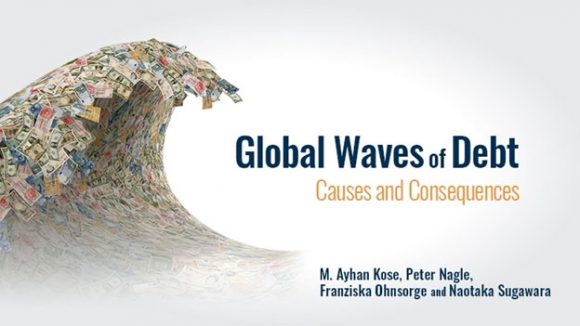 It is a 221-page report that looks back at three previous debt waves.  They all started in about 1970, not surprisingly when the last discipline of the gold standard was removed from the international monetary system.

Each wave has had its own unique features and similarities, and they are covered in considerable detail.  Sometimes it is government debt expanding too fast, sometimes corporate debt, and even household debt.  An ever-present feature is the build up of debt in EMDEs, or emerging market and developing countries.

Interestingly, each wave of debt began during a period of low interest rates and rapid financial innovation, similar to the present period.

One of the important conclusions of the study is that in all three prior cases, it ended with financial crisis and global recession.  There were no exceptions.

The study indicates we are now in the fourth wave, which they suggest began about 2010.  Of all the waves studies, the fourth wave, the one we are in presently; is “larger, faster, and broader” than any of the earlier waves.

Debt has ballooned in the past few years among EMDEs, and among major economies, especially China.  Much of the borrowing seems to be funded by sources other than the traditional western banks making up what is called the Paris Club.

Debt has now reached the astounding level of 230% of global GDP.  For the sake of comparison, US government debt to GDP at the end of WWII, was about 112%.  That the whole world has been able to reach these levels of debt during peacetime, is quite a development.

China has gone into debt in a big way, and also has facilitated many emerging economies to go into debt, perhaps as a way of spreading Chinese foreign policy influence.

Speaking of China, Walter Russell Mead, writing in the February 4, 2020 edition of the Wall Street Journal, calls China the “Sick Man of Asia” and ominously concludes, “China is as ripe as a country can be for a massive economic correction.  Even a small initial shock could lead to a massive bonfire of the vanities, as all the false value, inflated expectations and misallocated capital implodes.”

Extremely high debt level leaves those economies afflicted with substantial vulnerabilities.  Among these are a recession, a rise in interest rates, too much debt in foreign currencies like the dollar, which present foreign exchange risk, bad debt management, poor supervision and regulation, and a break down in the rule of law.  Anything that reduces the earnings stream to support debt, a change in the price of debt, or major changes in foreign exchange values, represents a risk.

Beyond those, there of course is the risk of a Black Swan, or an unpredictable internal or external event such as the outbreak of the virus currently spreading in China, domestic political turmoil, or war.

For investors, it means difficulty.  Since the world is so interconnected today, the chance of a financial contagion spreading is as bad as a fatal virus.

Current interest rates are far too low to compensate for the risk being taken in many sectors of the bond market.

While debt has reached extremely high levels as this report points out, there currently seems no political will or consensus to reduce or slow down the debt accumulation.  To the contrary, most of the political pressure seems to desire huge new social programs (Medicare for all, free medical care for all illegal aliens, and the Green New Deal), that will have to be financed by ever higher debt levels.

Stocks, bonds, bank accounts, and insurance products, all have value if the counterparty on the other side of the contract can fulfill all of their obligations.  Gold is not a contract and is considered valuable by all past and current civilizations without the need of state sanctions or guarantees.

This World Bank report deserves to be widely read.  If investors listened to the lessons contained in the report, they certainly will want to have a hedge in gold for protection against the next, inevitable international credit crisis.