As we approach August, it is worthwhile to remember that 49 years ago a momentous event occurred that changed the course of our nation.  What was that event?  It was the unilateral abrogation of the Bretton Woods Treaty, the final break with gold, and the beginning of floating exchange rates.

A brief background must be provided to make sense of this event.

The formal world wide gold standard ended in 1914 as European nations suspended the gold standard to allow governments to inflate their currency to pay for the Great War.

After the armistice, most of the world attempted to return to some semblance of a gold standard, but never really succeeded.  Instead, they used a gold exchange standard, which lacked the discipline of the original gold standard.

Then came the Great Depression.  Franklin Roosevelt, took the US off the domestic gold standard in order to inflate the currency for his New Deal economic policies.  Heretofore, paper money was more like a warehouse receipt.  Any American, or any holder of US dollars, could present paper money to the US treasury and take possession of the gold or silver that was backing up the currency.  If the supply of metals did not grow, it was difficult to increase the supply of money. Typically, gold had to back about 25% of the money supply.

Roosevelt suspended this right for Americans, but foreign holders of dollars retained that right.  This would permit a rapid expansion in money supply.

Then came World War II.  As the arsenal of Democracy, the winner of a two front war, the US stood astride the world as the most powerful nation.  Near the end of the war, plans were made for the post war economic era.

These plans were worked out at a resort in Bretton Woods New Hampshire, and were formalized in a treaty of that name.  Basically, the US dollar and the British Pound would be the dominant currencies, backed by gold.  But with Britain weakened by the war and a quick turn to socialism, the dollar quickly become the sole reserve currency.  It remained, backed by gold.  At the end of the War, the US sat on most of the world’s gold.

As before, while backed by gold, the ability to convert remained only with foreign holders of US dollars, domestic holders were still denied that right.

As Amity Shlaes points out in her brilliant new book, Great Society, Lyndon Johnson, after the crushing defeat of Barry Goldwater in 1964, ramped up the war in Vietnam, and launched a huge expansion of government social welfare programs.  This brought deficits that were both large and chronic for the time.

The US economy suffered, and huge trade deficits developed.  Foreign countries began to worry that the Bretton Woods arrangements would not hold and began to cash in their dollars for gold.  Less gold in US reserves meant less money, since gold had to back about 25% of the money supply.  This severely restricted new spending programs.

US gold reserves continued to drop precipitously.  The free market gold price began to rise above its official monetary price. By the time President Nixon came to power, the “gold crisis” was becoming a constant source of anxiety.  The President called a special meeting at Camp David.  Around him were all of his economic advisors and his aggressive Secretary of Treasury, John Connally.

Connally was a Texas Democrat whose rise in the public eye really occurred when he was present in the car, and was wounded, during the assassination of John Kennedy.  He was not well schooled in monetary affairs.

Although supposedly a conservative Republican, Nixon had a penchant for buying into statist and big government schemes that were decidedly anti free market.  Nixon became convinced, despite arguments from the Chairman of the Federal Reserve Arthur Burns and others, that wage and price controls, and an abrogation of Bretton Woods were necessary.  Otherwise, he feared the US would lose all of its gold reserves.

These fears were quite valid as the nation had quickly lost more than half of those reserves in something called the London Gold Pool in 1968, an attempt to stop the price of gold from rising in a separately functioning free market, called the Two Tier system: one tier the official price for currency turned in for gold, the other a fledgling free market.

Nixon decided to cut the tie with gold completely by suspending convertibility, and to allow freely floating currency exchange rates.  As Schlaes points out, many of his advisors thought this would be a temporary measure and that the nation would soon return to the old policy.

Below, is a link where you can view the actual weekend special address to the nation announcing the break from gold. https://www.youtube.com/watch?v=4-cB1Z9qceI

Not only does he deflect blame from his and previous administrations failure to control spending while fighting a war and building a welfare state at the same time, he blames speculators.  Since currencies and bonds at the time did not trade in the futures markets, he simply is blaming those who knew his policies were doomed.  If there were speculators, at the time they had scant tools to speculate with.

Further, he makes a claim that one hears widely repeated today.  Around the 45 to 55 second mark, he states that the strength of a currency is based in the strength of the nation’s economy, and is not related to the quantity of money produced by government to finance its deficits.

Using his argument, clearly the US has remained, and is today, the largest and most productive economy in the world, with the most powerful military and a reputation of the rule of law.  Therefore, we should have a strong currency.  We don’t.

Yet what does he mean by strength?  Usually strength in a currency means it holds value against both goods and services, and against competing currencies.  But since the dollar trades in a sea of fiat currencies that all lose value, what the dollar actually buys over a period of time is the best test of strength.

The chart below shows that this break from gold has led to a very weak currency, one that has lost more than 80% of its value in the past 49 years. 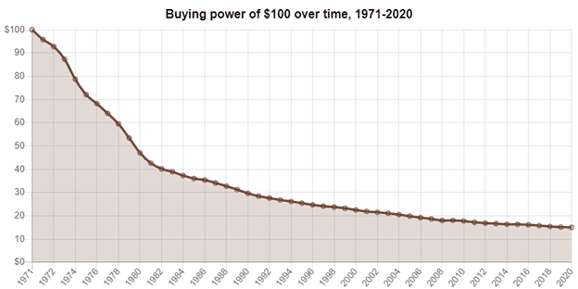 According to the Bureau of Labor Statistics consumer price index, today’s prices in 2020 are 537.32% higher than average prices since 1971. The U.S. dollar experienced an average inflation rate of 3.85% per year during this period, meaning the real value of a dollar decreased.

In addition, economic growth has been slower, and levels of speculation much higher since the break from gold. Income inequality has gotten much worse and the standard of living for middle and lower classes have stagnated.

Economist George Gilder, in his worthwhile book The Scandal of Money, shows that once currencies started to fluctuate, so did bonds and stocks begin to fluctuate more.  With new financial innovation, trillions of dollars turn over that have no relationship to wealth production at all.  A bigger and bigger piece of the economic pie has gone to the financial sector.

Most consumers and producers find constantly changing relationships difficult for planning.  But they are a gravy train for a handful of international banks that trade bonds and currencies via the futures markets.

Because currencies are always fluctuating, companies engaged in production for international trade must reduce their risk. Under the gold standard and fixed exchange rates, they had no such risk.

Gilder notes: “By various measure, 90 to 97 percent of all the transactions are judged to be ‘speculative’, devoted not to enabling trade in goods and services but to harvest profits and fees from arbitrage and leverage…these tolls and fees are burdens on global trade and economic growth…”

The currency market often trades more than $5 Trillion in a day, equal to about a quarter of the entire nation’s output of goods and services.  The real beneficiaries of all this unproductive shuffling of assets are precisely the speculators Nixon so excoriated in his Presidential address.

Yet floating exchange rates have not made financial crisis less frequent or increased the rate of economic growth.  In fact, they have yielded the opposite.

Because Nixon cut the tie between the dollar and gold, we have moved into a period of constant depreciation of purchasing value and ever greater volatility and speculation.  Real incomes have made less progress after the break from gold than before, and the biggest restriction on government spending has been eliminated, leading to ever greater expansion in the size, scope, debt, and cost of government.

There is no gold behind our money.  There is nothing but the promise of politicians.  Given the crop of leaders moving up through the ranks, how does that make you feel?