The Bitcoin Boom and Its Mysteries

Bitcoin has been on a tear of late.  As you read the financial press, it would seem the world is very desirous of a currency other than the US dollar.  Something that is limited in quantity and hence able to hold its value better than the fiat currencies electronically created by governments.

You would think such need would drive both Bitcoin and gold in the same direction, but that is not happening.  Why? 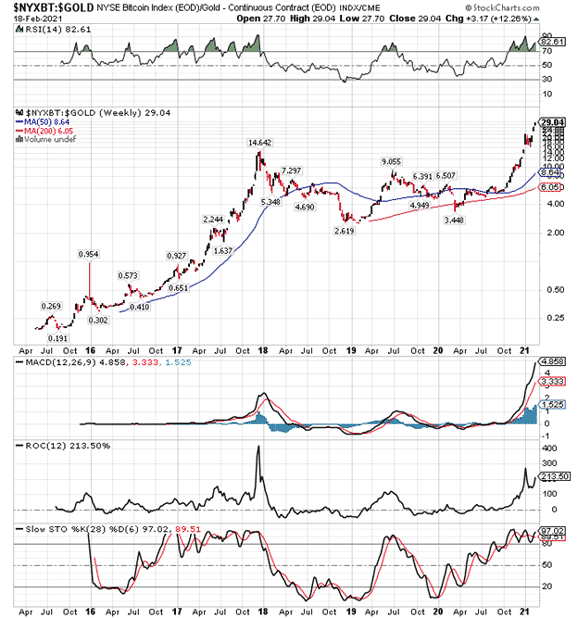 Since Bitcoins and other cryptos have not been around that long, we have limited history.  What we do have, as shown in this relative strength chart, shows one can out perform the other for a period of years, and then reverse.  Since it is a ratio chart, when the line slopes upward, Bitcoins are outperforming gold, and when it goes down, gold is outperforming Bitcoin.

It shows they swing back and forth, and at this time, Bitcoin is about as “overbought” in relation to gold, as it was at the end of 2017.  After that point, gold outperformed for about 2 ½ years, and then Bitcoin became stronger last October.

In short, based on technical analysis, it would seem Bitcoin is now very expensive relative to gold.

Getting back to the odd disconnect between the two rivals to government issued money, some have speculated, that the desire to own crypto currencies has attracted money away from gold and that crypto currencies are likely to replace gold.

We see evidence certainly of the former, but we really doubt the latter, as we will explain.

Over 4,000 new digital currencies? Yep.  So, they are not limited in quantity, are they? More are created all the time.

In addition, many are used for nefarious purposes.  For example, ForeignDeskNews reported on February 17, 2021 that Iran, “has been turning to Bitcoin more than ever to boost its economy amidst the Covid-19 pandemic by acting as a destination for Chinese ‘Bitcoin farmers’ and allowing cryptocurrency as a valid form of payment for imports.”

Bitcoin apparently are a way to avoid the financial restrictions of sanctions.  This demand may be partially behind the parabolic move upward in Bitcoin prices.

There are also are also reports (February 18, 2021, Wall Street Journal) that North Korea has been using Bitcoins and has additionally engaged in the theft of crypto currencies.  The have even floated their own crypto currency, which turned out to be a fraud. Little has been written about the theft of digital currencies but we would like to know more about that.

We don’t pretend to have the technical expertise to explain the nuances, but our impression is that anything maintained on the worldwide web is a target for hacking, government intrusion, and even outright interference.  You don’t have to be an expert to know that, just be sentient enough to read the news.

We have recently had an alarming number of foreign hackers get into extremely high levels of the US government, including messing around with our nuclear stockpile. It would seem nothing is really secure on the Web.

It is also a fact that commercial vendors, such as Amazon and Facebook, have gone out of their way to shut down, without notice, outlets of political speech they dislike.  Often, they have acted in concert with governments, either US political parties or the Chinese.  They have even made some moves against allies and democratic states, such as Australia. If they can shut people down for speech on behalf of governments or themselves, what else can and will they restrict?

Then, there is the issue that most governments now include cyber warfare as part of their national security apparatus. In the case of conflict, they can disrupt their opponent’s computer networks.  The ultimate of course, would be an Electron Magnetic Pulse or EMP attack that could knock out a whole array of communications and electrical distribution.

In short, we are not convinced that the Web is a trustworthy place even to do business let along rely upon in either the case of oppressive governments or conflict that might develop between governments. Any currency that is digital is a creature of the web and subject to hacking, interference by government, interference by Big Tech, and even a promising future terrain for warfare.

Our final concern is the notion that governments will promote the use of private currencies without interference.  Our sense is that governments don’t like when you to hide things from them.  They don’t like tax evasion, numbered bank accounts, or tax havens.  They also don’t like ways to avoid sanctions, forced wealth redistribution, and regulation.  It restricts their power.

At the end of the day, government understands the power they have of being the issuer of the currency.  They can either print money for pennies, or conjure money electronically for nothing, and get to spend it first at full face value.  This is the historic privilege of seigniorage.

In the modern era, the power to create money is among the most powerful tools government has to direct the economy, redistribute wealth, and pay its bloated bills. It is doubtful government will simply let these powers and privileges go to private actors without a fight.

Finally, government spent years getting out of the restrictions of the gold standard so they could engage in their socialist dreams.  It is doubtful they will allow privately issued currencies to interfere with this process.  No monopolist likes competition.

Thus, it would seem to us, there is no substitute for the physical ownership of gold when hedging against the risk of currency debasement, which is itself a government enterprise.

Gold is not a promise to pay. It is an element without counterparty risk.

Finally, there is the issue of history and culture.  Gold has been money for all of recorded history.  It is cherished in many cultures ranging from Ancient Egyptian, Aztec, Indian, and Chinese, to refugees fleeing oppression from war torn countries.  It has a track record.

We are not saying digital currencies could not over many years, establish a track record, we are saying they are too new and have not done so.

Part of gold’s allure is its beauty, utility for industry, and durability.  Gold that sunk to the bottom of the ocean floor 500 years ago is still valuable today as is the gold from the relics of ancient Egypt or the gold that was carried by refugees fleeing Nazi tyranny.

It is worth noting that just about anything electronic today that is older than just 10 years, quickly becomes obsolete and worthless.  Besides, what is the allure of an electronic digit?  Block chain may prove to be a useful technology, but it is mentally hard to wrap your head around something that exists only in the “cloud”, and has no tangible value.

Gold has a track record and is embedded in all cultures around the world.

What track record does Bitcoin have?  What utility does it have beyond that of an electronic unit of account and a speculative plaything? Besides it is hard to be a unit of account when its value varies so widely.

We don’t know why the digital currencies are going bonkers right now, and why gold is quiet.  You would suppose that the tsunami of money and credit being produced by governments all over the world, would be pushing both upward.

We suspect there are some countries using it for secret transfers and we suspect further that crypto currencies likely have entered a speculative parabolic bubble phase.  Money can be made in bubble, until you don’t.

These cryptos currencies may well go higher still, but we all know how bubbles end.  Moreover, there are legitimate concerns about anything that only has value because it exists as an electron floating in the ether of the cloud.