Silver Kicks Into a Higher Gear

For quite a period of time, silver underperformed gold.  The gold to silver ratio, a calculation that basically shows the relative strength of the two metals, continued to soar well outside its historic range to as high as 131:1.

We felt this was excessive and as indications started to show hints that this relationship was about to change, we alerted you that silver was now likely to outperform gold as the ratio regressed back to more normal historical levels.  See July 2019, September 2019 in the archives to gain this perspective.  On June 1st of 2020, we wrote another alert wherein we suggested relative strength has turned in favor of silver and that for those coming late to the precious metals party, silver would make a great date.

Well, how has that call turned out?  Thankfully, the market has cooperated and kindly helped us avoid looking like idiots. But even we are a bit surprised by how truly vigorous silver has been acting.  After all, the world is still in a Wuhan virus slump, with recovery uncertain.  Silver tends to act more like an industrial metal although historically, it generally has tracked gold. 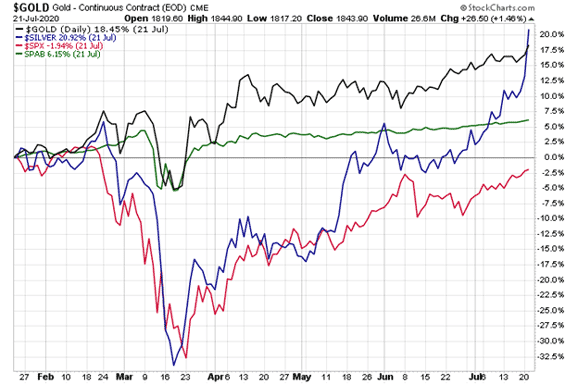 The chart shows the relative performance over the past six months of gold, silver, the S&P 500, and the Bloomberg-Barclays Bond index.

Silver is the blue line.

Note that in late June, it turned from virtually no gain to a gain of over 20% just in the past few months.  Silver has exceeded the performance of gold marginally overall, but has way outperformed it since our last alert to you in June. The orthodox asset categories are nowhere near the performance of gold and silver bullion, or the precious metals mining stocks.

The curious mind always wants to know why.

The best explanation is that we are likely headed into even bigger increases in Federal spending and FED monetization, regardless of who wins the election.  Neither party is talking anything close to typical balance the budget talk.

Mr. Biden has taken on most of the economic advisers of the Bernie Sanders campaign, including Modern Monetary Theorist Stephanie Kelton.  He has embraced reparations, the Green New Deal, and nationalized government health care.  All this will be in addition to already large projected increases in the deficit due to aging demographics and the underfunding of Social Security and Medicare/Medicaid.

Gold and silver prices clearly reflect that there is no political force to stop the huge increases in spending. If the Democrats win, even greater excesses in spending and monetization are likely. Gold and silver are far outperforming other traditional asset categories and therefore deserve a prominent place in your portfolio.