Sometimes a long-term weekly chart gives a different perspective.  Long term charts are one of the few sources of information to answer this question:  what are the longer-term possibilities for gold? It is not science, but it is the best we have. In this case, the charts are rather illuminating.

Notice the multiple points of overhead resistance around $1400.  Once broken, there is remarkably little chart resistance (areas of previous tops, bottoms, and consolidations) until you get to about $1800.  Then there is little resistance again to the previous peak in 2011 at around $1930. 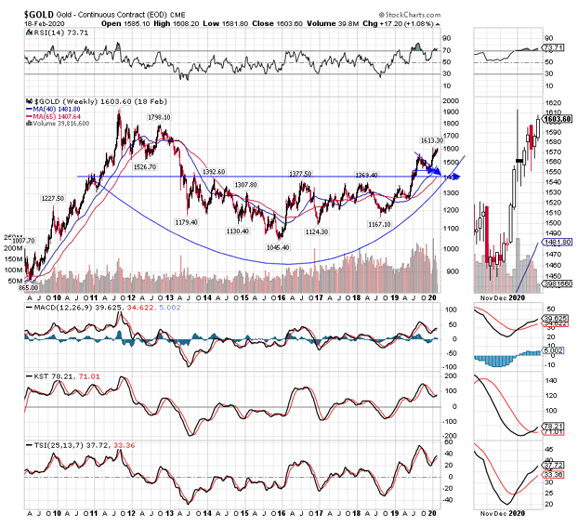 Further, the entire formation looks like a massive base in the form of a saucer bottom.

Sentiment remains neutral.  Thus, the good news is that gold is steadily moving higher and avoiding getting terribly overbought, either in term of sentiment or momentum indicators.  Speculative excess is present in stocks and bonds right now, but not the gold price.

It is surprising to see such steady improvement in the gold price despite a record high stock market and what has been a strong dollar.  Usually, this does not occur.

So, an assault on the old high at $1,930 certainly looks possible.  Once there, it gets even more interesting.  Assume we break the line that would be formed from the old peak, at $1,930, to the new peak. It would leave a formation in place of even greater potential.

A reasonable case can be made that once we do get to the old highs of $1,930, after some likely backing and filling around the previous resistance ($1,800), a break above that new line of resistance could open the way to another possible advance of $1,000, to somewhere in the range of $3,000 per ounce. This is not to suggest that gold won’t suffer the temporary difficulties of getting overbought, correcting, consolidating, and then advancing once again.  That would be quite normal.  And there is no reliable method of timing these shorter-term corrections.

What is most striking in the long-term chart is the lack of immediate upward resistance ahead, and the impressive size of the saucer bottom being formed. Our conclusion is that such a massive base built over so many years confirms that gold is in another bull market, and a big one. This is exciting!