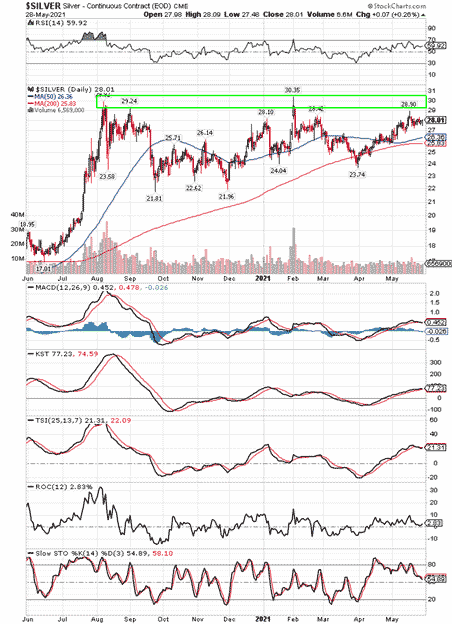 The last couple of reports have concentrated on gold.

Indeed the action on gold has been important.  After a severe oversold condition, gold put in a bottom in early April and has advanced through important resistance at $1800.

Gold is once again at important overhead resistance near $1900 and is a tad overbought.  After a pause for consolidation, we expect it to move through resistance to higher prices.

There is help coming from multiple factors.  Real interest rates are dropping, as inflation surges and interest rates back off.  There appears to be a rotation out of crypto currencies back into gold. Central banks have again become buyers, flows are now positive back into gold bullion ETFs, and the US dollar is struggling. Retail demand for small bars and coins remains strong with coin premiums staying elevated.

Meanwhile the Biden Administration is proposing $6 Trillion in new spending.

The satirical Babylon Bee countered with an article that Republicans were mounting opposition and proposing a $5.9 Trillion dollar increase.  It would be funny if not so tragic.

All that said, it has been a while since we have looked at silver.

Silver, like gold, is hammering on important resistance.  And unlike gold, silver is not probing near all-time highs.  It remains in the area of roughly half of the two all-time peaks around $50 per ounce.

There are also indications that Comex inventories are falling, typically a sign that requests for delivery are reducing supply.

A quick glance at the chart above tells an interesting story.  Silver is on the verge of completing a quadruple top breakout.  A decisive break above $30 would be an important technical achievement.

Both the 50 day and 200 day moving averages are sloping upward and prices remain above both lines.  Yet as we approach resistance in the $29-30 range, none of the momentum indicators are in overbought territory.  Notice that they are much lower than the readings last September when silver was is the same range.

The smaller chart is longer term, some 15 years of history, and you can see once we break above current resistance, there is not a great deal of resistance to plow through to attack the highs of 2011.

Thus, gold’s action remains important but let us not forget silver.  It too has a very impressive chart.

While silver is not a central bank reserve, it too has been money for thousands of years and it too will notice the utterly insane monetary and fiscal policies being implemented by our government, and we should add, almost all other governments around the world.

Charts are courtesy of Stockcharts .com.  All data is derived from source believe reliable but investment results cannot be guaranteed.