Gold is now at a turning point, which happens to be slightly below the blue 50 day moving average.

There were a series of highs formed around $1760 that represents the “neckline” of the double bottom formation that gold has been building. (See chart below)

Secondly, all the momentum indicators we typically use, bottomed (see last chart below) with the price action in early March and all of them have now turned upward.  This supports the idea of a shift in momentum, which should allow the current overhead resistance to be breached and send us to very important and substantial overhead resistance in the $1800 range.

We have argued we thought gold was putting in some kind of bottom in early March based on extreme sentiment and momentum readings but that gold needed to prove the case by developing an upward price trend.  But, as the great technical analyst Richard Russell used to say, “a trend in force is a trend in force, until proven otherwise.”

Since last August, the trend for gold has been downward. And, every time we get to an important inflection point where a trend change becomes likely, gold has chosen to back off. In the last few trading sessions, gold went right to the “neckline” of this modest sized double bottom and stopped.

What do we need to get a trend change?

Certainly, taking out the neckline mentioned (see pink horizontal line) and then overhead resistance would be helpful at making that case.  Turning moving averages upward does the same thing since it tells you the average price over a given time period has shifted.

It is helpful to use gold and mining shares sort of like Dow Theory uses the transports and the industrials averages.  They should confirm each other, which potentially could happen over the next few days IF gold can get above, and hold, the $1760 area.  The gold mining shares have already broken their “neckline” from a double bottom and gotten above their 50-day moving average. 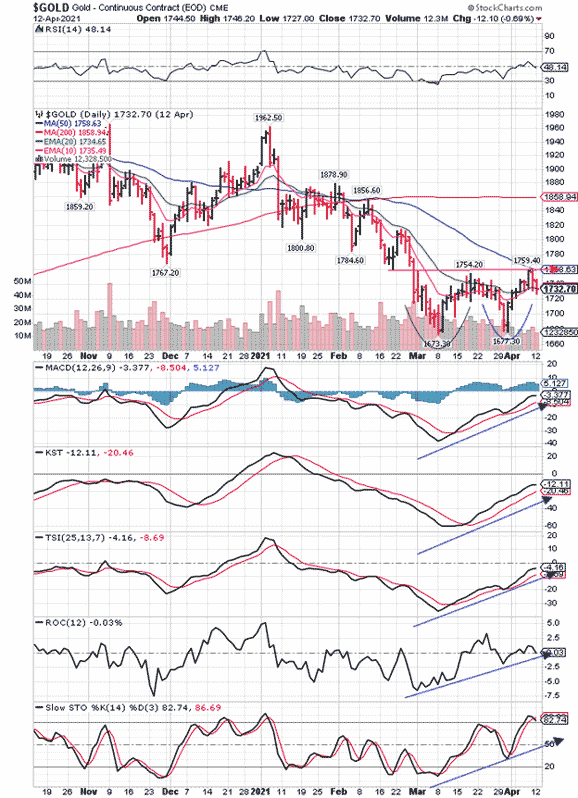 There is no one price level where one can declare the end of the bear trend.  It is more of a “weight of the evidence”, kind of process.  But clearly, $1800 was very important overhead resistance on the way up, and important support on the way down.

With all the data we have on sentiment, momentum, linear and moving average trend, a close above $1800, that is held for several or more days, would take out the primary linear bear market trendline from the peak reached last August. Breaching this line is quite important, technically.

While there are many stories about wild spending from the Biden Administration that should be positive for gold, there were three stories unrelated to that which caught our attention.  One was that Hungary has made a substantial addition to her gold reserves by tripling central bank holdings.  We have not seen central bank buying in a while. https://www.bloomberg.com/news/articles/2021-04-07/hungary-tripled-gold-reserves-as-central-banks-turn-buyers-again

And, we have a news report that India is introducing legislation to outlaw crypto currencies.  We have long suggested that governments will not be giving up their monopoly on money as it is too much power to turn over to private actors.  Don’t confuse a digital currency with a crypto currency. https://www.reuters.com/article/uk-india-cryptocurrency-ban/india-to-propose-cryptocurrency-ban-penalising-miners-traders-source-idUSKBN2B60QP

A digital currency is simply an electronic variant of fiat currency.  A crypto currency is supposedly secret, coded, and limited in quantity that is privately issued.  That gave them “gold like” qualities, or at least so it has been argued by advocates.

In a cover story this week in Barron’s, the magazine pointed out that 95% of all the Bitcoin ever “mined”, is controlled by just 2.4% of the accounts. Such an imbalance in liquidity is striking as is the nasty habit of cover stories occurring near major tops.

There is no doubt that cryptos have directed money away from the gold market and the mining shares.  When it becomes clear that governments are not going to give up their monopoly on money, and all the power that comes from that, some rethinking is likely to occur.  This will be positive for gold, in our view.

In addition, India reported a record 472% increase in March gold imports, of 160 metric tons. This is quite a reversal in the pattern of imports from last year.

Another story getting insufficient attention is inflation is generally the relationship between the quantity of money in circulation, how rapidly it turns over (velocity), and the quantity of goods available.

Recently Professor Jeremy Seigel of the Wharton School, well known as a commentator and author, wrote in The Financial Times that “…the monetary data are striking.  Between March and November, the money supply surge in 2020 exceeded any in the one-and-a -half centuries for which we have data.

Monetary expansion has also been robust in much of the rest of the world, but nowhere nearly as pronounced as in the US.  And the new Biden administration will surely provide even more fiscal stimulus.”

In addition to the surge in the monetary aggregates, pure price data coming from both the most recent release of the Producer Price Index and Consumer Price Index indicates that inflation, while still modest, is starting to heat up.

Clearly, fundamentals are getting more favorable for gold. 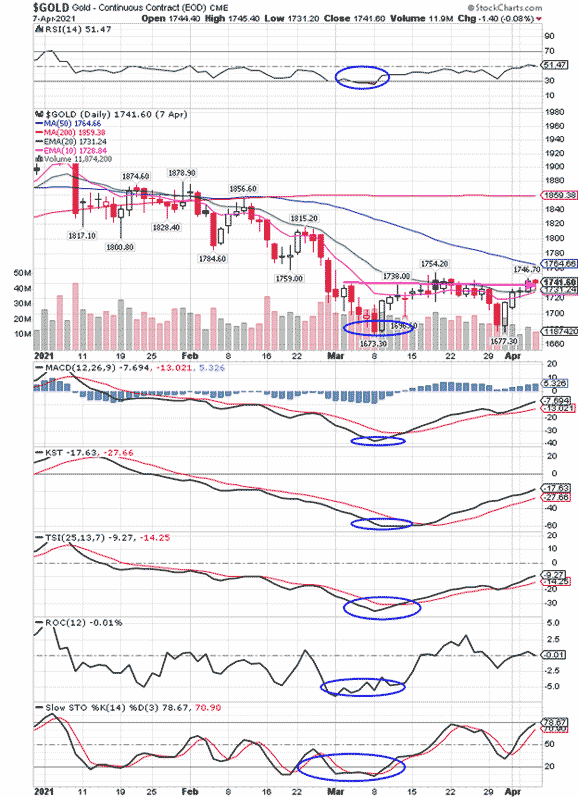 Charts are courtesy of stockcharts.com.  Information is derived from sources believed reliable but investment results cannot be guaranteed.