Part of gold’s recent story has been that of disappointment.  A rally begins, and what takes weeks of clawing upward is erased quickly. Then gold starts the process again seemingly to fail at important inflection points.  End result: flip flopping around in trading range.

Could that be happening again?

On Friday, perhaps due to short covering for the weekend and with the threat to Ukraine, gold reached $1860.  Notice, in the chart below, that in terms of momentum, we are not nearly as overbought as the last two peaks.

On Monday, February 14th, the gold market followed through with more to the upside.  This appears to be more than Friday afternoon positioning for a nervous weekend trying to figure out Russian intentions.

Fundamentally, it is preferable that we would have gotten to this level without being caused by a news event.  A news event that could get really a lot worse. Or peace could break out as both sides move to de-escalate. We are where we are in part because of anxiety about war, so we would not want to be those that are selling short the market under these circumstances.

Gold is attracting attention now from traders. A closing price above $1880 (if it can do it), would be convincing. Finally, unlike the last few peaks, there are now substantial inflows into the North American bullion ETFs, while before, there was heavy outflow.  According to the World Gold Council, over 46 metric tons flowed into North American ETFs just in January.

So many disappointments lately have likely kept people away and hence, as the price rises there is money that wants to get in, but has been hesitant, and there are substantial short positions that are trapped as well.

Bundle these factors together and there’s a good chance we will finally get a surprise on the upside. 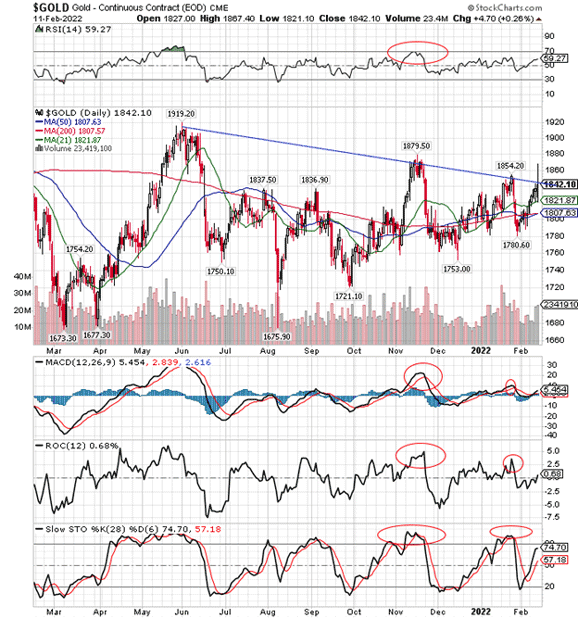 Information is derived from sources believed reliable, but investment results cannot be guaranteed.  Charts are courtesy of Stockcharts.com