In our last entry, we suggested that gold had become “overbought” and vulnerable to correct, even though the main theme was taking a closer look at silver.

The selloff seemed primarily caused by reaction to statements from the Federal Reserve, especially those of non-voting member Bullard of the St. Louis FED who suggested interest rates might be raised as soon as the end of this year.

This statement contradicted earlier statements from FED Chairman Powell, who had suggested such increases were unlikely until next year.

The FED seems reluctant to admit their own policies have touched off a major reflationary episode, but suggested that if inflation did get out of hand, they would act.  Since the official inflation rate is now twice their own target of 2%, one has to wonder what it will take to move them beyond talk into actual action.  Meanwhile, the Inflation Surprise Index kept by Citigroup has soared to a 23 year high. 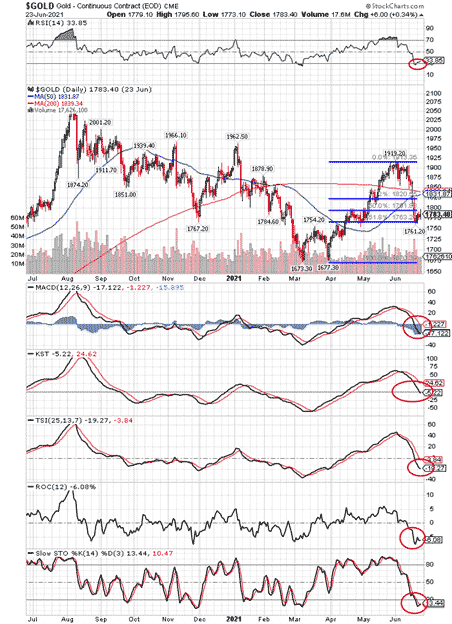 However, just the hint that the FED would cut down on its liquidity injections seemed to cause a selloff in the “everything bubble.”  Stocks retreated, commodities dropped, crypto currencies tanked, and gold sold off as well.  As one observer put it, the FED is no longer there to take away the punchbowl, it is the punchbowl.

The FED’s response was to immediately walk back many of their statements, which did further damage to their credibility.

For the FED, talk has been cheap as they have not really moved to reduce their balance sheet or allow rates to rise since December of 2018, when they started to tighten only to retreat quickly after an almost 10% drop in stocks.

The FED seems trapped by its own policies.  Coupled with incredible spending increases on the fiscal side of things, they have created major distortions in the value of stocks, bonds, and real estate.

Signs of dangerous speculative fever abound.  Real estate prices are on a tear with the median price of family homes now at a 43% spread above the CPI, easily beating the 35% spread achieved just before the housing bubble burst in 2007.

We continue to see record high margin debt in the stock market, and that may just be the tip of a bubble in lending. Not counted in margin debt is  “securities based lending”, that allows investors to borrow on the value of their stocks, not to buy more stocks, but to buy real estate, and just about anything else.  A sharp drop in the stock market could leave both types of loans exposed and force a liquidity crisis.

Other signs of speculative mania abound. As James Stack of Investech Research put it, “…including record high margin debt, an IPO mania that dwarfs most predecessors, esoteric digital art called Non-Fungible Tokens (NFTS) that sell for millions, and a Cryptocurrency craze that is starting to resemble the Tulipmania of the 1600s-including the latest crypto-trader favorites:$ASS Coin and PooCoin.”

FED caused speculative fever from years of zero rates has in addition created a kind of investment nihilism, as seen by the names of the new crypto currencies.  Hip computer savvy young investors seem to feel the laws of economics, and common sense, have been repealed because of their brilliance.  They seem to relish mocking the investment experience of their elders. We doubt this is going to work out very well for a lot of new investors.

As for gold, it has now swung from overbought to oversold and is down to major resistance. Note in the chart above that just about all the momentum indicators are now in oversold territory and the market has made a full .618 retracement from the March low to the recent high.  In bull markets, such a retracement usually does not go much further than that.

In addition, gold has now retreated down to its intermediate 3 year trend line.

Because gold has experienced some damage, and broken below both intermediate and long term moving averages, it will take a while, and more backing and filling to rebuild a base.

However, nothing we have seen either from the FED or from the Biden Administration suggests this is anything more than a correction within the context of an ongoing bull market.

On the fiscal side, a supposed bipartisan agreement is opening the way for another huge spending project, the Biden infrastructure deal.  Whether this comes to pass or not, it demonstrates Democrats want more spending and Republicans lack both the will and power to stop them.  As one weary commentator put it, “wouldn’t it be nice to see a bipartisan agreement to balance the budget.”

Thus, there does not appear any near term threat of a break out of fiscal sanity to threaten the long term prospect for gold and silver.

Readers likely know, this blog is written to assist long term buyers of bullion and coins, and is not a trading service for futures traders.  About the best we can do is attempt to find areas of value where it looks like long term buyers can acquire the metals they need.

This certainly looks to be one of those areas of value. Gold is now oversold, it has retraced about what one would expect, and is now down right on the intermediate trend line.

Investors with a long term view of things should feel comfortable buying in the present range.

Charts courtesy of stockcharts.com.  All information is derived from sources believed reliable but investment results cannot be guaranteed.