Gold has been in a deceptive correction since last July.  We say deceptive because it has failed several times by the narrowest of margins to breakout, it has stopped at appropriate resistance, only to hover there in a tantalizing fashion, and then proceed lower.

It is not that picking a bottom is ever easy (it isn’t) but this particular move has been especially difficult. As we note, gold has technically danced around key areas, and even made two false breakouts to the upside on the way down!

On the fundamental front, it has been equally puzzling. The M2 money supply has jumped year over year about 25%, one of the biggest advances on record.  The election went to the bigger of the two spenders (not that Trump was a fiscal conservative), deficits are growing like crazy, and the Chairman of the FED Jay Powell, states that the quantity of money issued has nothing to do with inflation.

Democrats just passed a huge spending bill, with the Wall Street Journal estimating that only 9% of expenditures go to Covid relief.  There seems no restraint on massive spending financed by borrowing and printing money.

You would think these fundamental developments would be enough to send gold soaring, but it hasn’t. Many commentators explain these anomalies by citing two factors: rising interest rates and the parabolic rise in Bitcoin.

We understand the role of interest rates.  But rates are hardly punitive yet and it is not at all clear why ONLY gold should be adversely influenced by rising rates.  Copper, lumber, and real estate have no “yield”, but they keep rising.  The stock market does not like rising rates. It is a puzzle.

Whatever factors are at work, gold has now dropped almost $400 from its peak near $2,100 to the area just below $1,700. For those with long term faith in the yellow metal, things are getting confusing.

Momentum is once again very oversold.  Sentiment has also declined to levels typical of forming bottoms.  Futures positioning has undergone a dramatic shift. Hedge fund long positions in gold are now down about 80% from the high reached in 2020.  Bullion and jewelry buyers in India and the Far East are starting to come back into the market. Physical supplies of small bars and bullion coins are tight, with demand well outstripping what the mints of the world can produce.

In short, speculative money seems flushed out of the market, but long-term buyers who want to own the actual metal are demonstrating demand.

Calling the exact bottom is a fool’s errand and we don’t pretend to be able to do that.  However, we do think it is possible to identify a price zone that should get us close to the low.  The area around $1,600 to $1,650 seems to be that zone. 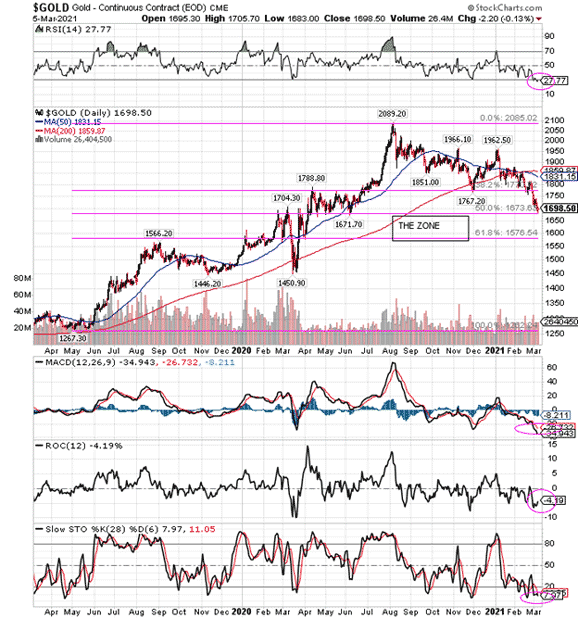 It would be nice to get a high volume wash out, or a dramatic reversal (new low followed by a close above the previous day’s close). But sometimes market bottoms don’t come on a bang, they come on a whimper.  Whichever way it ends, we think the zone mentioned should contain the bulk of it, and hence is an area where long term buyers will find great value.  Often, you don’t even know you have had a bottom until you can look back at it.

Note at the bottom of the chart above, the momentum indicators circled.  We are now at areas where previous bottoms formed back in 2019 and during the Covid liquidity panic in the spring of 2020.  Given the favorable macro background of money growth and deficits, gold will likely hold these retracement levels.

Finally, it does appear that Bitcoin has drained some money away from gold but it is hard to quantify.  The market cap of all crypto currencies has very quickly grown to about the same market capitalization of privately held gold.  And, it would appear the motives for buying them are similar (owning something other than government issued paper) but they really are not comparable.

The public seems enamored by Bitcoin, there is no doubt.  Celebrities like Elon Musk, Pitbull, Snoop Dog, Gwyneth Paltrow, Madonna, Mike Tyson and Johnny Depp are among the big fans.

What your reaction is to this depends.  For ourselves, we think that few of those folks mentioned are known for their knowledge of economics or history.  There is something unnerving about investment endorsements by celebrities. Blockchain may well be an important technology but the level of hype in this thing is truly extraordinary. Bitcoin has gone up about 10-fold in less than a year and has gone parabolic on huge volume.  What could go wrong with that?

In fact, we doubt government likes private currencies since it removes from them monopoly power over money.  It also hides activity from them and tax revenues.  If you control money, you control a lot.  So, you think they will give that power up without a fight?

Finally, we provide a chart of Bitcoin, since many believe it has changed basic perceptions about the role of gold in the monetary system, we now have to chart it for that reason alone. Bitcoin is starting to show some weakness after it has gone parabolic, which is usually not a good sign.

In the case of gold bullion, about 2,500 tones are mined annually.  Jewelry takes about 2,110 tons and electronics about 320, or about 2,330 tons.  That leaves only about 7% of new production for private investors. What moves the price then are investors buying and selling the existing above ground stock back and forth to each other.  Among those investors are central banks.

The demand for Bitcoins is solely speculative. It doesn’t have the intrinsic demand from industry or central banks undergirding its price. When investors wish to sell, they can only sell to other speculators. When the herd changes direction, that becomes a problem. Anyway, weakness in Bitcoin would probably be a favorable thing for gold so we will be watching it just for that reason. Time will tell, as they say.