Debt is Now a Runaway Train

The amount of debt owed by the US government has risen to the highest levels ever recorded. More importantly, as the chart above shows, it is the highest debt ever in relation to the size of the economy. In peacetime, it now exceeds the peak of World War II.
Notice that over time, debt surged during wartime, and declined thereafter. The problem now confronting us is that debt is unlikely to decline this time as it has in previous periods.
There are several reasons why this is likely. 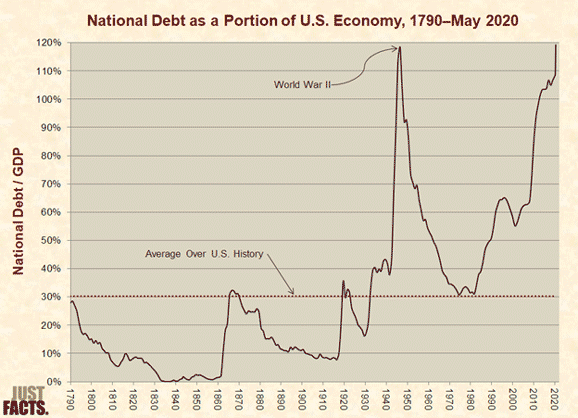 Wars end eventually, even long ones, and expenditures naturally fall. Even if the war ends in extended occupation, costs fall. But most of the deficits we see today are not caused by war but by politically popular programs. Almost three quarters of the budget is now social transfers and interest payments. True, trimming the defense budget would help slow the trend, but it would not reverse it. 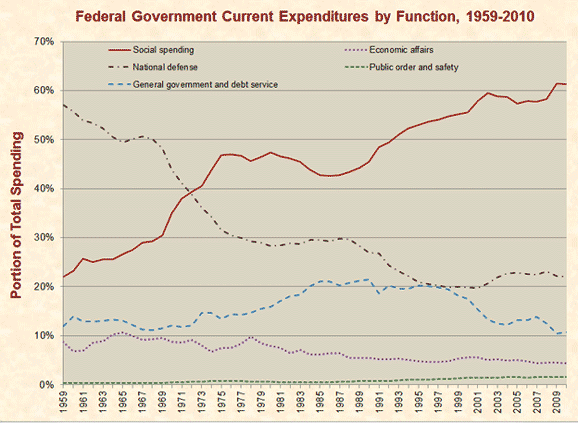 Social welfare programs don’t end like wars. Wars kill people and that creates negative blowback for politicians. But with social welfare, people become hooked on “free money”, programs that they believe will be paid by someone else. Politically, it has proven impossible to take away benefits once provided. Thus, social spending grows exponentially and does not end with an armistice.

The really big social programs are Social Security and Medicare/Medicaid. These are age driven, not need driven. One qualifies for a state-run pension and health care simply by reaching the appropriate age.

As long as the population is growing, this can work. In the early 1950s, when Social Security was relatively new, there were about fourteen people working versus one recipient. This continued to be the case as the peak years of the baby boom (1957) lay just ahead.

But now the numbers have all gone haywire. Older people are living much longer than actuaries anticipated and we have gone from 3.4 children per woman in 1957 to less than 1.7. Over the next 10 years, the largest portion of the Baby Boom will head into retirement. That alone will drive spending and deficits higher.

The ratio of worker to recipient will fall below 3:1. The level of taxation on young workers will have to be so high to keep benefits in place, that politicians will take the painless way out, borrow the money.

In terms of medical expenditure, the older you are, the more you are likely to spend. And when you are spending someone else’s money, and when doctor and patient are separated, there is little throttle control on spending. Both those factors drive spending.
After wars, people want to get back to normal. But with a social welfare system, benefits are normal and no one wants to go back to no benefits. Voters have adapted to the transfers from government and reshaped their lives around them.

Not only is it unlikely that voters will vote for reduced benefits, they are likely to vote for more. Notice today’s politicians offer constantly more programs: free healthcare for all, free college education, credit guarantees, college debt forgiveness, new expenditures for climate change, reparations, and recently, pandemic expenditures.

There were no pandemic expenditures for the 1918 Spanish flu, or for the epidemics in 1958 and 1968. With no public vote, and virtually no debate, we have stumbled into a new entitlement; pandemic restitution. So far it has added about $3 trillion to the debt and it is still rising.

Our political parties were more balanced in past history. Generally, one party wanted bigger government, the other smaller government. One wanted more expenditures, the other less.

As our system was designed, these factions played opposition to each other and retarded wild expenditure. Today, both parties are big spending parties.

We used to have institutional mechanisms that constrained spending. Government was limited in what it could do by the Constitution. But constitutional restraints have largely been interpreted away by the Supreme Court.

Government previously had to redeem currency in gold and silver, and thus was restrained, in how much they could both borrow and print by metal holdings. If debt was excessive, gold would tend to leave the country or move to private hands automatically reducing bank reserves and thus the money supply. Our central bank, the Federal Reserve, was restricted to own either gold or government bonds. All ties with gold were severed 50 years ago and now the Federal Reserve has expanded its mandate by purchasing corporate bonds and municipal bonds. It also is purchasing huge quantities of government debt with money created electronically for that purpose.

In fact, the Fed since the late 1980s has increasingly intervened in each business cycle by purchasing debt itself, which has allowed the Congress to avoid making tough decisions about budgetary expenditure. Congress does not have to worry about how potential creditors view their behavior or the market reacting to a debt over supply by increasing interest rates. The FED has been the enabler to the Congressional spending drunk.
By forcing rates downward to zero, the Fed has allowed the annual interest cost on the national debt to decline, so the Congress can painlessly keep spending and borrowing, without the restraints of the market place intruding into their festivities.

While suppression of rates allows the government to borrow more, it also at the same time, destroys the safe rate of return for investors, insurance companies, and pensions. It causes money to be misallocated in the private sector.

Interest rates function as economic traffic signals, directing capital to the correct destination. We can’t go into detail on this latter point, other than to say if you think low rates don’t have a downside cost, you are kidding yourself.

And with the debt we are racking up, God help us if rates start to rise. With a $24 trillion dollar debt approaching, just a 1% rise means a $250 billion boost in interest payments.
In summary, just about all institutional constraints and political restraints that controlled debt and deficits, have been abrogated.

Besides the sheer financial difficulties huge debts can cause, such indebtedness has a moral dimension. Unless all the debt is inflated away (a process itself that has created chaos in the past), the debt must be paid for by the young, a shrinking number of young people in the next generations.

The young are taking on huge future burdens designed by today’s political leaders. The young and the unborn have no knowledge of these obligations and certainly did not consent to them. Taxation without representation caused a revolution but what English monarchs once did pales in comparison to the nonconsensual generational transfers being engineered by today’s leaders.

To live well today, and screw the kids, is immoral. To do so without their knowledge and consent, is undemocratic. To rob them of their chance for a good life, for the benefit of present recipients and politicians, is criminal. It is plainly intergenerational theft.