What is an inflection point?  It is a point, or multiple points, on the chart where success or failure at a given price juncture is believed to have some predictive abilities to determine a change in price behavior.

The yellow metal is approaching a cluster of price levels that could determine whether this bear trend continues or whether it changes to a more bullish trend.

Gold has been in some sort of bearish phase since the peak in August of 2020 that terminated just north of $2000 per ounce.  It has approached key inflection points before, but was not able to break to the upside, and hence the bearish trends continued.

As we write we are at a cluster of important inflection points, and some have already been resolved to the upside, suggesting a change in trend is at hand.  Sometimes inflection points are broken in a dramatic fashion, and sometimes not.  This last approach to these levels has been very stealthy.  By that we mean gold will break one level, a few days later break another, and a week later break some more.  It has been kind of a “rolling breakout”. Let’s review what has been going on. 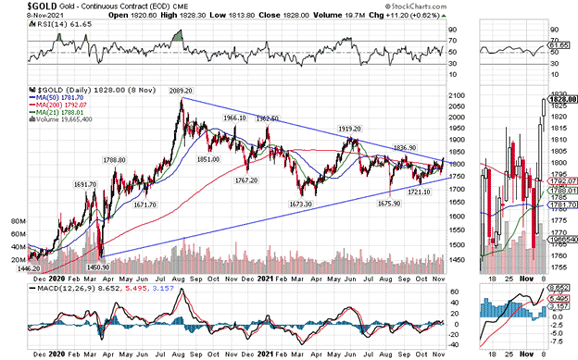 Gold has formed what some call a “pennant”, a type of triangular formation caused by declining tops but also rising bottoms.  The market gets squeezed between these to opposing lines and the exit from this formation is believed to suggest a trend in price change.

Thus, if we define a price trend as either a line or define it in a more dynamic moving average, gold is right in the process of breaking these inflection points. And it is doing all of this, as it breaks out of the pennant.

Pennants are believed to be “power formations.”  Usually, whichever way a market breaks out of a pennant will set the direction for months and even years, of price performance in a new direction.  Given the size of this pennant, the price objective is fairly large.

We have just broken above an old high price at $1837, reached back in September.  Breaking old highs is always important.

It is vital that gold continue to break through and hold these levels.  It may not do that all in perfect sequence, but rallies must hold and any retreats need to be mild and short lived.  Gold needs to show stamina and persistence at this important juncture.

We know from our readers that some people find technical analysis mysterious.  It is not so complicated.  The old saying is, the trend is your friend, and that a trend in force, is a trend in force until proven otherwise.

Gold has been in a modest bear trend for a while, and bearish trends are not conducive to profits.  We might argue that given the wild spending, record trade deficits, and ballooning money supply, that gold should be behaving better.  We agree with that, but unless the trend changes, the fact is we remain in some kind of bearish phase.  The market could care less what we think should happen. As things have gotten worse on the inflation front, gold has not been participating.  We are not sure why.

But what we can observe, is that price trends as defined as a line or a moving average, will change at some point.  Markets cycle, both up and down, right?  If we can determine those inflection point where something is starting to change in the price trend, then we can better position ourselves to exploit whatever the new trend is.

In short, a change in the price trend is not what should be happening, it is rather what is actually happening.

Gold is now at an important juncture.  It is time to start paying close attention.  A successful break out would imply that if you were thinking of buying metals for the first time, or augmenting existing positions, you had best get along getting what you want as prices are likely to be rising for some time.  Another failure here would indicate gold is still in the bearish trend.

Notice too, we are not predicting a break out.  We are simply reporting what is necessary to get a change in the price trend going.  Gold will either succeed or fail, and the verdict will likely be had within the next week or so.

Gold has already broken a number of inflection points to the upside, so keep your fingers crossed.