A Tsunami of Money (Full Article)

Among the chief reasons’ investors are interested in gold is concern about the future purchasing power of money.  Gold has had an excellent record at holding its long-term value against both money and the cost of living.

Among the chief determinates of the future value of money is the expected quantity of money likely to be produced.

In an integrated economic world as today, the value of money is ultimately determined by the total of all money issued by domestic and foreign governments, and international agencies such as the International Monetary Fund.

For the purposes of this study, we will look at the likely issuance of money and credit from the United States government.  This is a product of the combination of years of chronic deficit spending plus the additional programs announced to deal with the economic lockdown triggered by the Wuhan virus.  This would include monetary (the FED) and fiscal (legislation) stimulus.

Like any estimate of this sort, it is a snapshot in time.  We think what we are about to say will be on the low side because depending on the response of the economy, and frugality by the government, additional spending is highly likely.  One real wildcard is what the government will collect in taxes from a slumping economy.  And another is no one knows at this time what additional money will be created by other central banks and foreign fiscal deficits, or what additional liquidity will be created by the IMF through the issuance of Special Drawing Rights.

Since gold is an international commodity, it will respond to the global creation of money and credit.

What we will attempt to do, is just give you a sense of what is likely to happen domestically, in the US.  The additional variable is what direction do our politics take?  If the nation chooses the Democrats in the fall, their socialist agenda will likely drive spending even higher than our guestimates. To be fair though, the Republicans, have been no slackers when it comes to spending.

That is an important point to keep in mind.  Only you can prevent destruction of your wealth by excessive money creation.  Neither political party can be trusted to do the job to protect the value of money over time.  Nor can you trust central banks or international agencies.

First of all, it is important to realize that programs that have already passed Congress are much larger than the total of fiscal deficits to address the Crash of 2008.  The charts below are estimates of just the additional spending to address the crisis from the Committee for a Responsible Federal Budget, a bipartisan think tank.  There is much other spending for such items as interest cost, defense, and social entitlement programs, baked in the cake and not shown.

It is highly likely though, that we will see even more spending.  Already Democrats are proposing $3 trillion in additional spending.  They want money for poorly managed states such as California, Illinois, New York, and Connecticut.  Even before this crisis these states were teetering on the edge and the national emergency now gives them cover for their profligacy.  In addition, many have state run pensions which are underfunded and will require some kind of bailout. 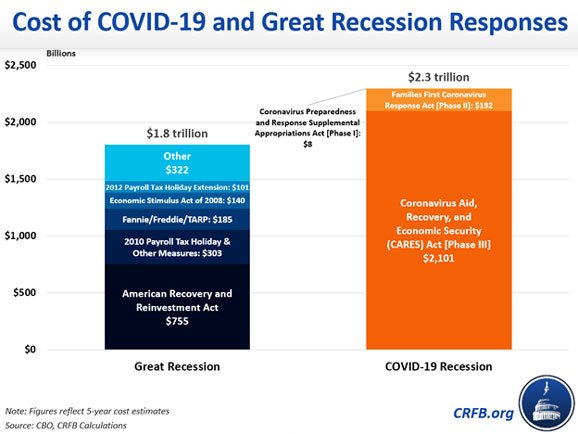 As we have pointed out before, while the nominal size of the deficits is important, what is more important is their relative relationship to the size of the economy.  As Brian Riedl of the Manhattan Institute indicates, deficits to GDP will be about twice what they were in comparison to the last financial crisis, 19.3% versus 9.8%.  And it will be approximately four times the 4.5% debt to GDP ratio of 2019. 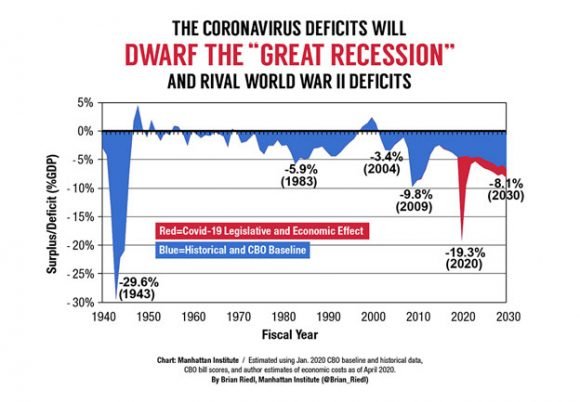 Likely we will see deficits about $3.5 trillion higher than 2019 for a total 2020 deficit of $4.5 trillion, with additional FED balance sheet expansion of $5.5 trillion, for a total of monetary and fiscal expansion in the range of $10 trillion.  On a GDP of approximately $23 trillion (that is likely to shrink), that is awesome monetary creation.  If Pelosi gets her proposed bill, deficits and FED purchases will be half of a year’s GDP! 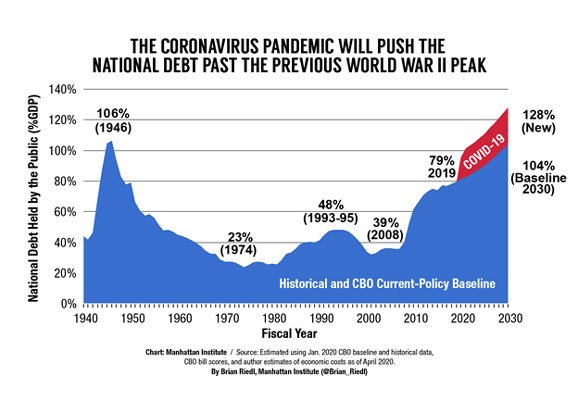 The $3.5 trillion or so of additional lockdown associated spending (red), unfortunately must be added to an already swiftly rising estimate of deficits caused primarily by the aging of the Baby Boom (blue) and the underfunded nature of our social entitlement programs, especially those demographically driven such as Social Security, Medicare, and Medicaid.  Before the end of this decade, this will push debt related to GDP beyond the peak of spending for World War II.  This has never happened in peace time in the United States so we are quickly entering very turbulent uncharted fiscal waters.

Much of this debt will be purchased by the Federal Reserve, because to dump these massive quantities of debt on the market will force down bond prices (causing interest rates to rise), which then puts severe downward pressure on all the bonds held privately. Allowing spiking interest rates is hardly a formula to boost borrowing during a depression so that will be avoided at all costs. 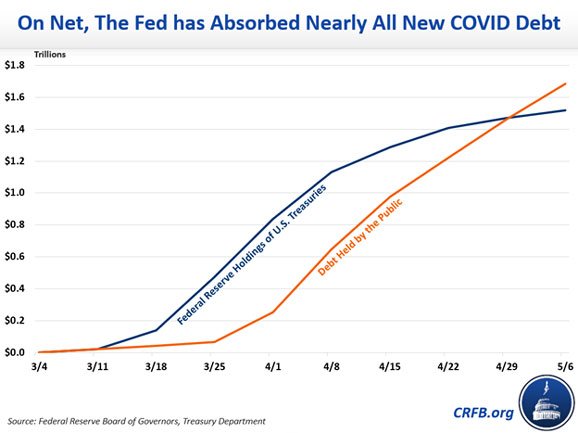 While the FED can purchase bonds from banks and other financial entities, the chart above indicates it has purchased almost all the new debt created for the corona virus lockdown rescue effort.

Where does the Federal Reserve get the money to purchase all this debt?  Why it creates it, of course!  The chart from the St. Louis Federal Reserve shows the growth of the balance sheet of the FED as a result of these purchases.  Notice that FED holdings were declining (-10%) as the FED was attempting to shrink its balance sheet from the 2008 crisis, followed by an 80% swing back up.

This experience illustrates another problem.  Once assets get on the FED balance sheet, it is extremely difficult to reduce their holdings.

Some writers suggest that most of this money created on the balance sheet of the FED will remain bottled up inside the banking system and that reserve growth will not translate to growth in the money stock.  This did occur to an extent during the 2008-2009 financial crisis as the FED could not get the cautious banks to lend and weakened debtors to borrow and hence, we had the classic problem of “pushing on a string.”

This time however, they seem to have learned their lesson and fiscal stimulus is putting money in the hands of the public through direct payments and through loan guarantees from commercial banks.  As a result, initial indications show a sharp growth in the M2 money supply.  Lending has been huge as business crushed by the government mandated lockdown reach for whatever life lines they can obtain.

Thus, the initial indications are, the deficits are being translated this time into an increase in the money supply.

It is worth remembering what gold did during the more modest and relatively ineffective stimulus after the 2008 crisis.

This current cycle started with a low for gold just above $1000 per ounce right at the end of 2015. The excesses of this cycle are far greater than the last one, forecasting an even a larger move for gold than what was experienced after 2008, possibly up to $3,500, as soon as next year.

Governments all over the world have forced their economies into lockdown with few exceptions, and all of them are responding with gargantuan monetary and fiscal actions.  These historically large deficits will have to be financed, likely by central bank monetization.

Get prepared! A tsunami of money is coming!

Information is derived from sources believed reliable but cannot be guaranteed.  Charts courtesy of Stockcharts.com, the Committee for a Responsible Budget, The Manhattan Institute, and the Federal Reserve Bank of St. Louis.